Hack the Box "Behind the Scenes" Writeup, or How to Skip Illegal Instructions in Executables

In this post, we’re going to dissect a very simple challenge from Hack the Box, “Behind the Scenes”. We’ll also look at how to work with Unix signals and how to skip illegal instructions in executables. Buckle up!

First of all, let’s try running the challenge executable.

The program expects a single argument with a password. Neat. Running strings over the executable haven’t yielded anything interesting, so let’s look at its internals with Ghidra.

Looking at the main function, we can see some Unix signals trickery at the beginning, and the endless loop with the invalidInstructionException(); in the end. 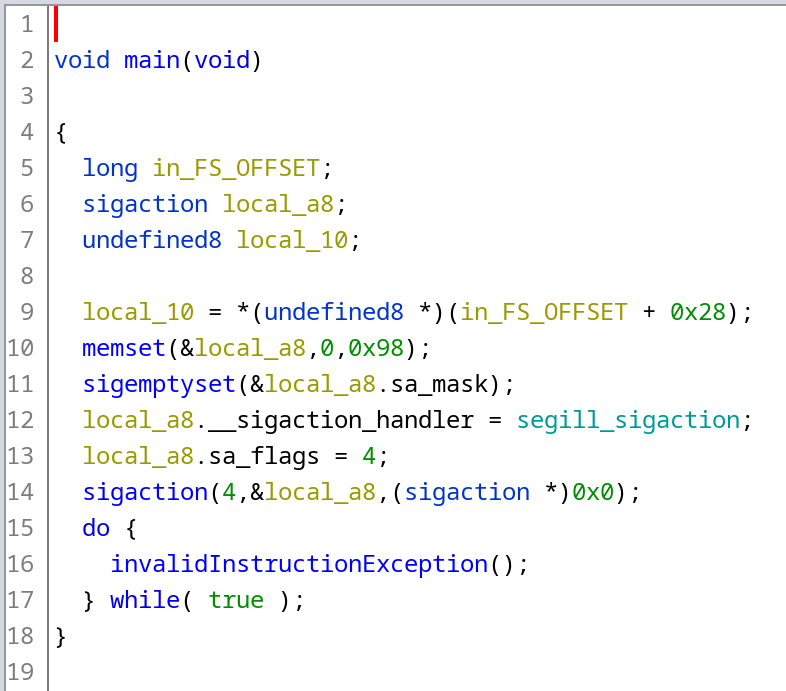 Let’s begin with the latter. While selecting the invalidInstructionException(); instruction in the decompilation, Ghidra highlights the following assembly instruction:

Referring to Intel® 64 and IA-32 Architectures Software Developer Manual, Vol. 2B, UD2 “generates an invalid opcode exception. This instruction is provided for software testing to explicitly generate an invalid opcode exception. The opcodes for this instruction are reserved for this purpose.”
Ghidra stops disassembling the file after the first occurrence of UD2. It makes total sense, by default the whole program will be terminated due to receiving a SIGILL Unix signal. However, there’s clearly more code after that instruction: 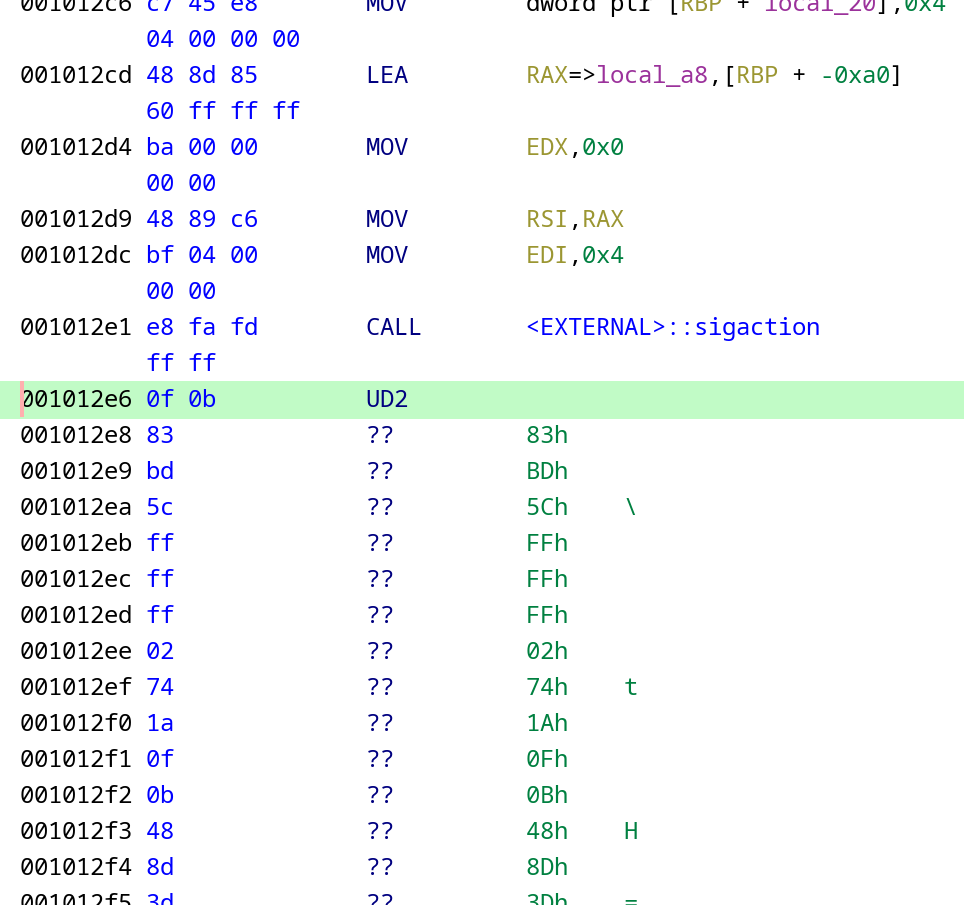 So, first of all, let’s select the rest of the code that hasn’t been disassembled and disassemble it by pressing “D”. As we can see, it’s indeed the executable code: 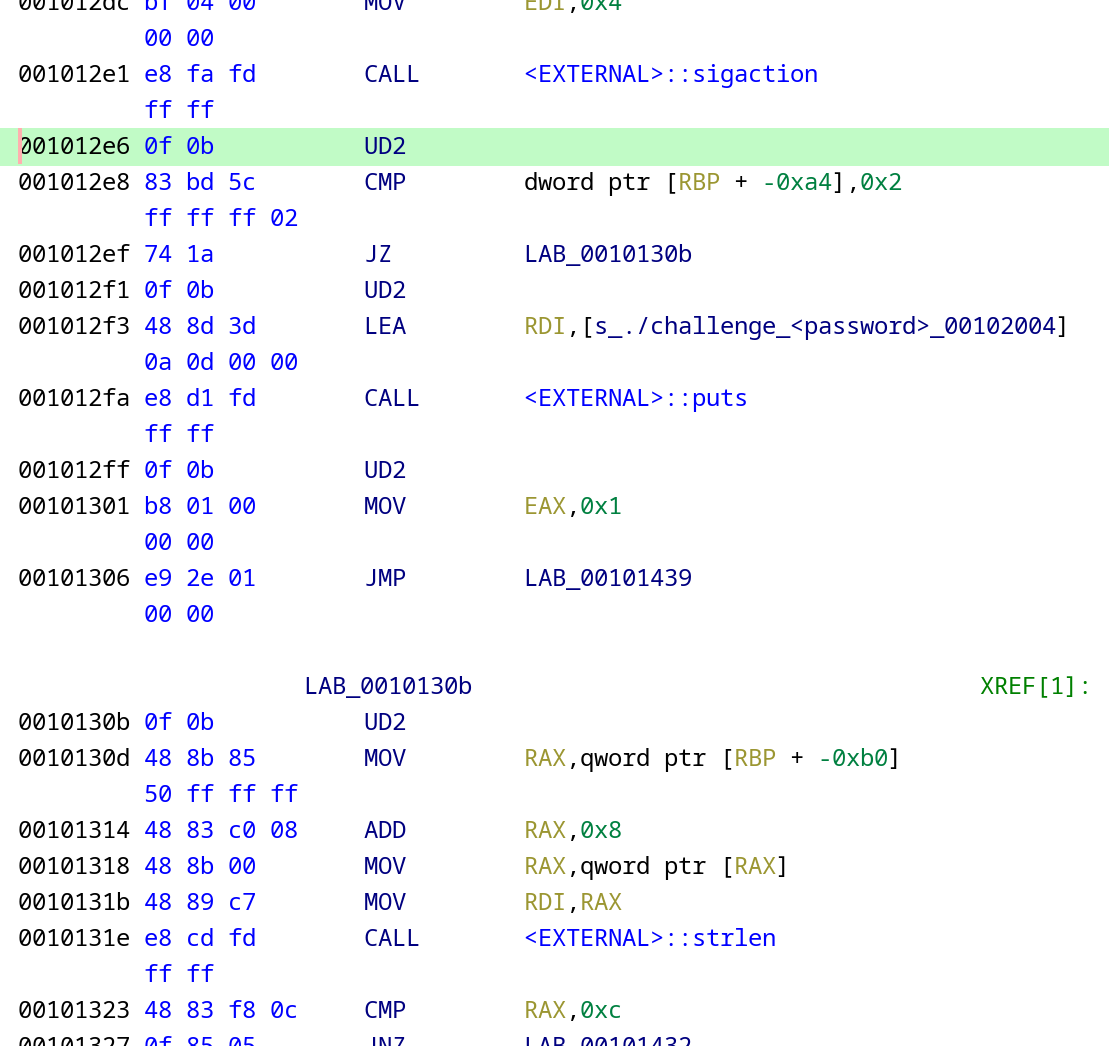 Next, let’s replace all occurrences of the UD2 instruction with a NOP (there are a few dozens of them scattered across the main function). After doing so, we can immediately see that there are 4 strcmps comparing the user input with string constants. And the flag seems to be a concatenation of these constants: 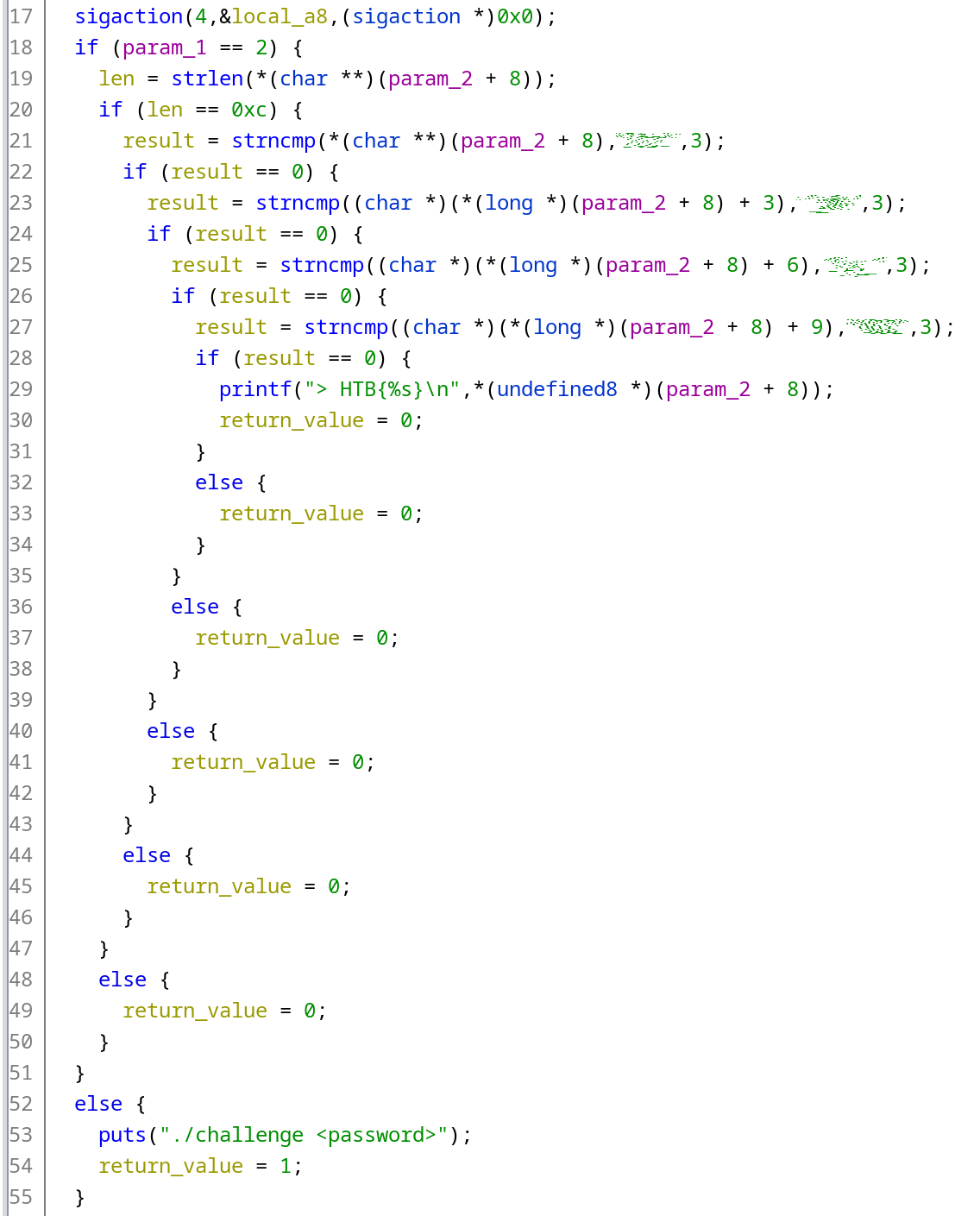 By inputting the concatenated value into the program, we can verify that it’s the correct flag. Easy, huh?

But how does it work?

That’s a good question, let’s figure it out.

Let’s take a look at the decompiled fragment of the main once again:

Let’s break it down:

The next piece of the puzzle is the signal handler function, segill_sigaction in our case.
The signature of the handler function is void handler(int sig, siginfo_t *info, void *ucontext). As sigaction(2) page states, these three arguments are as follows:

Page sigaction(3p) also states that new applications should explicitly cast the third argument of the signal handling function to ucontext_t *.

Let’s retype the 3rd parameter and take a look at the decompilation:

First of all, let’s take a look at the ucontext_t structure contents. As The GNU C Library Reference Manual states, it should include at least the following fields:

Aha, we’re getting closer. Let’s take a look at the excerpt from the glibc sources for the x86-64 architecture containing the mcontext_t definition and some of its nested data types:

As we can see, the field gregs contains all the saved CPU registers.

At this point, let’s refer back to sigaction(3p) that states that “when the signal handler returns, the receiving thread resumes execution at the point it was interrupted unless the signal handler makes other arrangements”. In our case, we deliberately want to resume the execution after skipping the invalid instruction. Since the UD2 operation is 2 bytes long, we can achieve that by incrementing the RIP register by 2.

Important note: this solution is quite hacky and tied up to run strictly on x86-64 POSIX-compliant systems. Don’t do this in any production code.
The only possible exception is if you deliberately trying to do some bizarre obfuscation, this can be one of your tools - since you have the access to all the saved context, it’s possible to change the values of the general-purpose registers, jump to another address by modifying the instruction pointer, and do another weird stuff (:

Compare it with what the Ghidra decompiled. Looks quite similar, isn’t it? :)

The only difference is that Ghidra wasn’t able to figure out the name of the register and just provided its index in the array, 0x10. We can manually verify that it’s the correct index of the REG_RIP. Alternatively, we can print the index of REG_RIP by running this snippet of code, which in turn prints 0x10:

Another way of doing that is to find the offset in the whole ucontext_t structure. Imagine that we only have the assembly listing of the function, which looks like this: 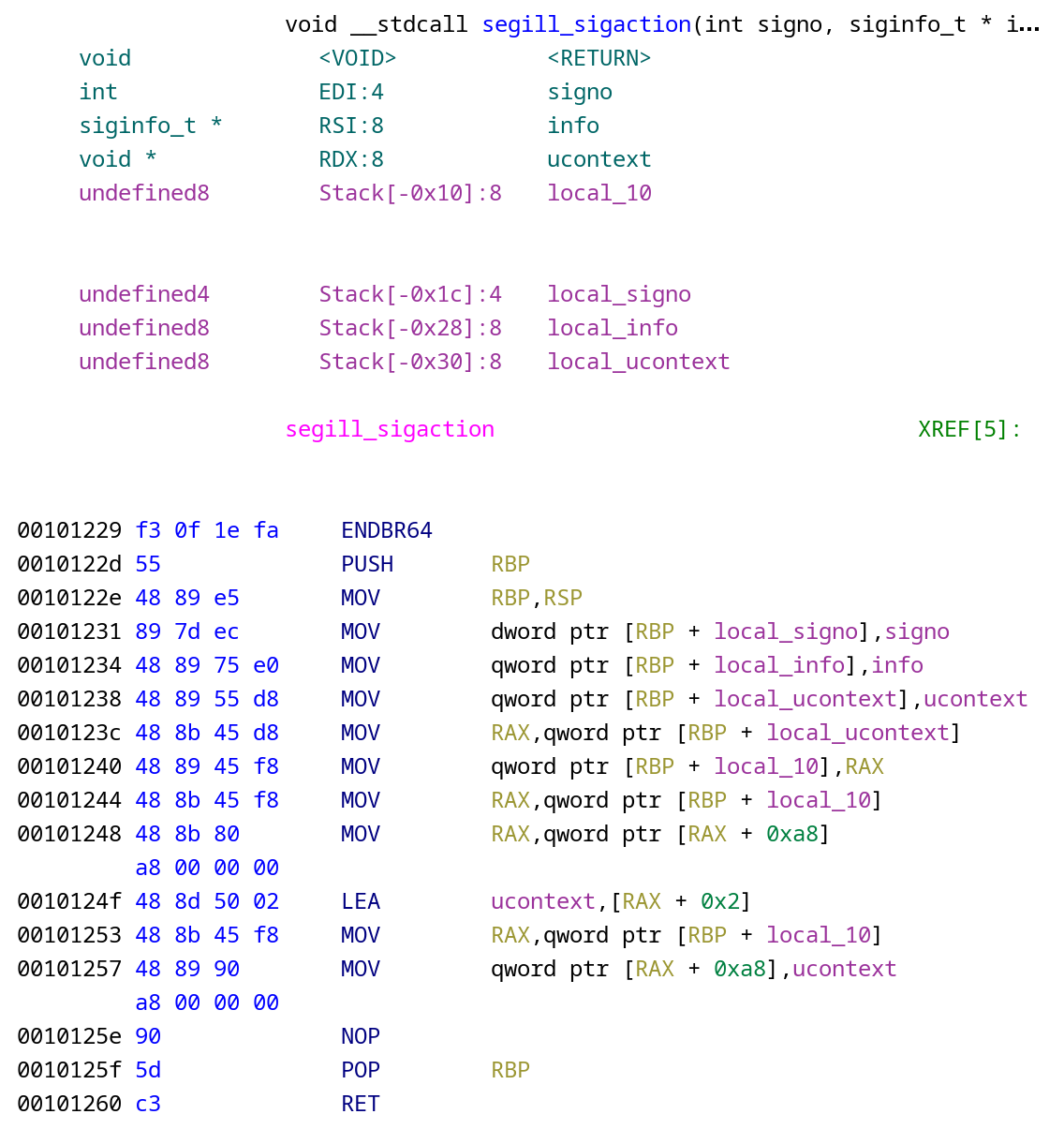 After some argument shuffling, the address of the ucontext gets stored in the local_ucontext variable. Its value at the offset 0xa8 is loaded into the RAX, incremented by 2, and written back into the structure.

By making an educated guess we assume that the function increments the RIP register. We can find it’s offset in the structure by running the following snippet of code:

It prints 0xa8, which matches the offset in both the assembly listing and the decompilation.

Combining it all together

Now let’s combine all the pieces of the puzzle together. Here’s a simple program which conceptually works the same as the challenge binary:

All in all, the resulting code is quite similar to the accepted answer to this question on Stack Overflow.

After compiling and executing it prints the following:

In conclusion, let’s compare the decompilation of our recreated binary (on the left, compiled with gcc (GCC) 12.1.0) and the one from the challenge (on the right):

It’s surprising how similar they are, and how close the decompilation is to the source code!

That’s it for today. Thanks for reading, and happy hacking!